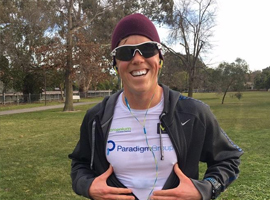 Winter is always a hard time to get motivated but joining a training group and getting out there with others makes it a little easier. I always say getting out of bed is the hardest part!

The last few weeks have seen some significant improvements and increases in my training performance and load. Most notably strength. Strength is often the first thing to go when you take a break from your designated activity. Everyone’s heart and lungs have a maximum ‘operating efficiency’ and during race day most competitors are functioning at somewhat close to this. That being said, if you can increase the strength in your legs you can push a bigger gear on the bike for the same ‘operating efficiency’ in your heart and lungs(cardio system) and therefore go faster. This is why we do strength training.

As a result my coach has set out lots of strength work on the bike and incorporated it into many running sessions. This often means nothing other than hills or as was the case on Saturday… “suffering into a headwind.” I rode to Safety Beach on the Mornington Peninsula. I was averaging close to 45kph of the way south taking me close to 90 minutes to get down there. After seeing sand being blown across the road near Mornington I was a little apprehensive about the haul back to Melbourne. It was extremely tough on the way back. I was drifting between 15 to 20kph and it took me a little over three and a half hours to do the return leg. The winds were gusty and relentless and I seriously considered getting on the train at Frankston as I was being buffeted all over the road. I would never forgive myself if I did that. I topped it off with a short jog to bring up the running kilometers to 100 for the week and I was exhausted. I just thought I’d share this small insight into one of my recent sessions.

I also had a relatively good hit out at Run Melbourne on Sunday surrounded by thousands of other runners and walkers enjoying a beautiful Melbourne winter day. Although it is sometimes hard to swallow a result when you know you are capable of much faster, the goal of the half marathon was to maintain good form under significant fatigue and run a faster second half than the first(negative split), which I was able to achieve. So I took away some positives from the race.

In summary I have managed to maintain my consistent approach over the last two weeks throughout the three disciplines. I am looking forward to continuing to build my strength both on the track and on the bike. With this week’s weather looking a little brighter I am planning to log some more time on the bike and in the water at the Hawthorn pool. In addition I have a training camp next weekend where I will continue to learn, absorb as much information as I can and build myself as an athlete and as a person.

I have attached a photo taken at a recent training session.

Paradigm are proud supporters of SACIM. The SACIM annual fundraiser was a...
Read more

FareShare – a small gesture is so much more than a meal

Have you heard of FareShare? This organisation rescues surplus food and cooks...
Read more